Four Canadians took to the start of this past weekend’s Skate of the Union in Chantilly, Virginia. The race, which was held next to Washington Dulles International Airport, was part of the NROC- a North American series of races & events.

Morgane Echardour placed 1st in the women’s division, managing to race with the chase pack. 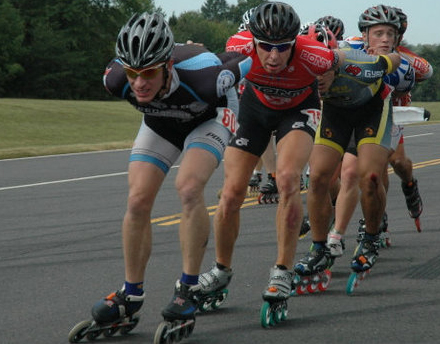 Peter Doucet placed 3rd overall after being involved in initiation a number of breakaways, including the winning break that featured 5 skaters.

The great story here is Morgane Echardour is likely to win the 2010 NROC Open Women’s division. Candy Wong from Toronto & Nadine Currie-Jackson will likely finish 2nd and 3rd, making the NROC Open Women’s podium an all-Canadian affair. In the men’s NROC Open Division, Peter Doucet scored top points at the Skate of the Union, giving him a real shot at the NROC title. Herb Gayle is sitting comfortable in 2nd place in the Veteran Men’s division, with an outside shot at the Veteran Men’s title.

For results and pictures, use these links and see the archives under September 19th: