After the short and long programs were completed and all was said-and-done, Whitby’s Kailah Macri finished in 5th in the Artistic Women’s Singles at the Pan American Games in Guadalajara, Mexico. 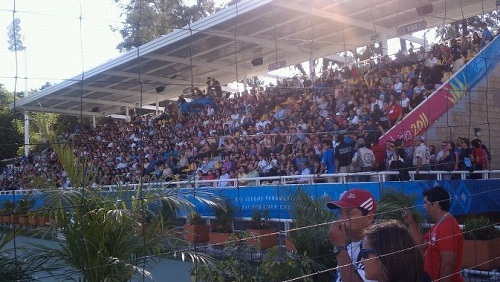 Spectators for the Artistic finals- photo from here

The speed team will begin its competition tomorrow. Sprinters take to the line for a 300-meter time trial and a 1000-meter pack race while distance skaters will skate a 10km race.

The Pan American Games are the 2nd largest multi-sport event after the Summer Olympics. The Canadian Olympic Team
consists of almost 800 Canadians who will be in Guadalajara and Puerto Vallarta. The athletes will be trying to achieve personal bests, win Pan Am medals, set records and for some earn an Olympic Qualification spot. (To be exact, 796 in total = 97 coaches+137 support team+ 67 mission team+ 493 athletes).

This multi-sport event is held every four years with 46 sports involving 42 countries from the nations of North, Central and South America. It is the only Olympic event in which roller sports participates.