The Canada Day Marathon & Half Marathon were held on July 1st in Cambridge. This year’s course featured newly paved sections of asphalt.

With a good turout of skaters from Ontario, Quebec, Alberta, and the USA, the race ended up being a success.

Featuring good levels of competition, an open-road course, and a BBQ, the Canada Day Marathon has become a main-stay on the Canadian roller speed skating scene.

Race organizer Jim Mallard and his team of volunteers put together a good event and were very appreciative of the support from local clubs & skaters.

Peter Doucet finished in the top positiong in the marathon after breaking away from an attack that featured Sergio Almeralla and Benoit Tremblay. Almeralla and Trembaly skated with a small group of skaters. The second and third steps of the podium were decided in a sprint, with Almerally claiming 2nd and Benoit Letrouneau coming in 3rd.

Click here to view photos and to find the preliminary results. 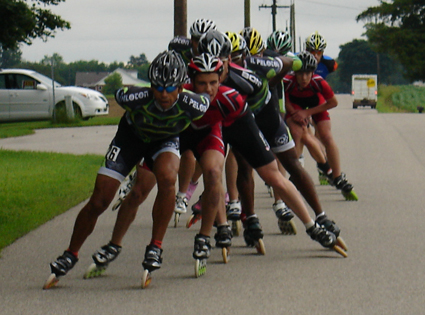